When I first started programming using Visual Studio Code, I’ve benefited much from the git gutter indicators that show added/deleted/modified code blocks that haven’t been committed by git. This allows for a quick overview of the lines I’ve changed and helps me keep track of my actions since the last commit. 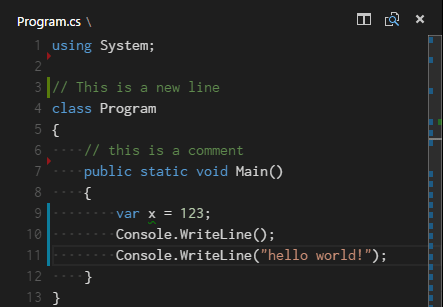 Over at the (neo)vim community, a similar effort has been made with the project “gitsigns”. I particularly like the way they mimic the visuals of the indicators of VSCode and Sublime Text: a thin colored line on the left fringe of the editor.

This got me to wonder whether we can get the same functionalities and visuals in Emacs. There are a couple of packages created for this purpose, including git-gutter, diff-hl, and git-gutter-fringe, but none of them have the same modern visuals as found in VSCode.

Fortunately, Doom Emacs has modified git-gutter and git-gutter-fringe’s bitmap values to mimic the appearance of the indicators that I like, and the author of Doom was kind enough to point me to how he’s done it. In the following paragraphs, I’ll show you how you can achieve the same visuals and functionalities in your own configuration, without having to use Doom Emacs. 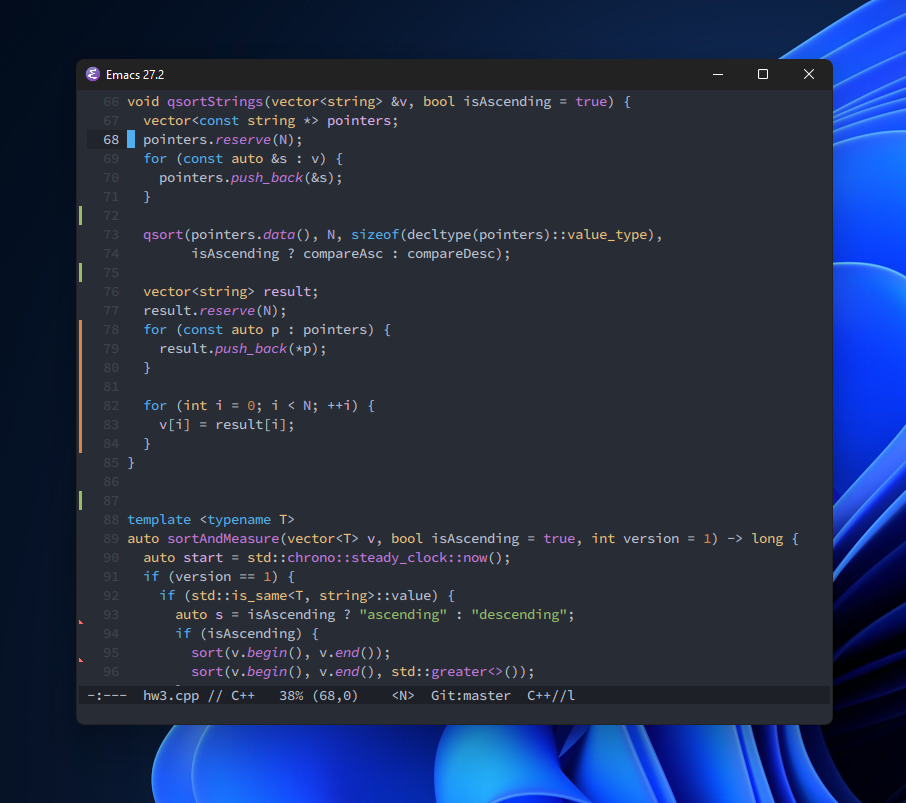 The two packages we’ll need for this to work are git-gutter and git-gutter-fringe. We can install them with use-package by putting this into our config:

P.s. If you don’t have use-package-always-ensure set to t, then you’ll need an extra :ensure t in the code block for use-package to automatically download the packages upon next startup, like so:

Step 2: Specifying when to enable git-gutter and fine-tuning update interval

Ideally, we’d like git-gutter to show up when the current buffer is version-controlled. However, in Emacs there doesn’t seem to be a built-in variable indicating whether a buffer is in a git repository (Edit: There is, you may use the function “vc-backend” to query it. Thanks, u/emax-gomax on Reddit!). Not to worry though, we can simply enable git-gutter for every buffer that’s derived from prog-mode, which is a “parent mode” for many programming languages. Here, I choose to use the use-package macro :hook, but you can explicitly set it with add-hook as well. If you need a quick tutorial on use-package, consider this post I wrote.

On top of that, I set the git-gutter’s update interval/delay to be 0.02 seconds. I find it a good balance between showing up instantly, but also not setting the delay too short such that it drags down performance. Depending on your preference, you can tune this variable to whatever you like. By default, this variable is set to “0”, which, contrary to intuition, doesn’t mean “instantly”, but rather “update the indicators only upon saving the file”.

To make the indicators look like the ones in Visual Studio Code, Doom Emacs has defined bitmap values for git-gutter-fringe. I have taken this snippet straight from their source code, so full credits to the contributors of Doom! In the configuration of git-gutter-fringe, add these 3 lines:

You don’t really need to understand how this works, just know that it is setting the vector values of the bitmap and correctly align them at the fringe to mimic the appearance of VSCode’s git indicators.

In conclusion, this is the full configuration you’ll need to achieve these pretty git-gutters in Emacs:

That’s all for today, thanks for stopping by.